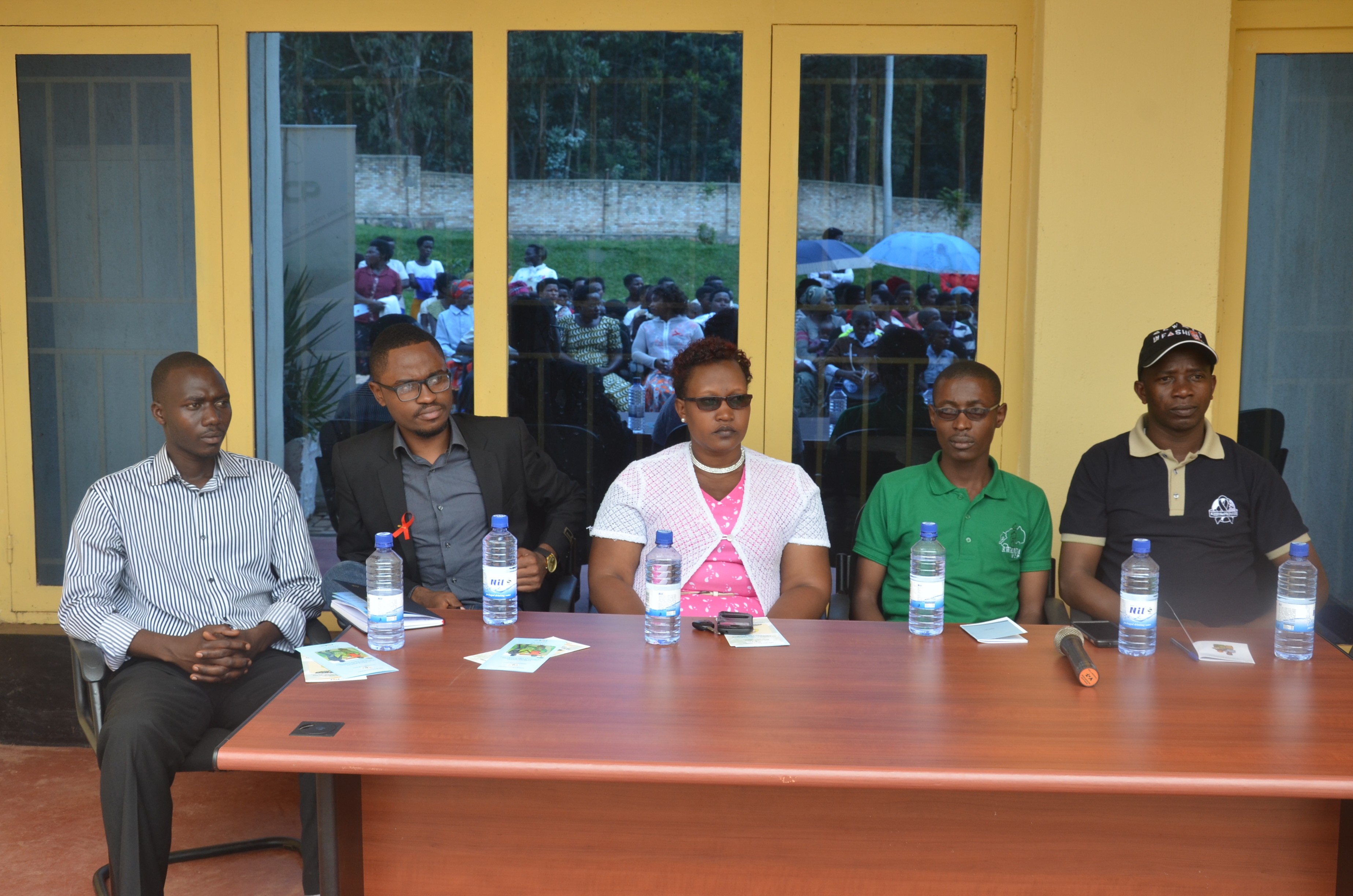 The Candlelight Memorial Day is an international day commemorated globally on the third week of May, where the whole World is in memory of those who died and other victims of HIV/AIDS pandemic. The Candlelight Memorial Day commemoration was introduced in 1983, established by HIV positive people. In Rwanda, it was the first commemoration in 2006 by RVCP (Rwanda Village Concept Project). The candlelight memorial day is the time to raise awareness about HIV/AIDS, helping people who have been victims of HIV stop stigma to HIV positive people, giving hope to HIV victims, and devise preventive measures for an HIV free World.

Before the event commemoration, there was campaign prior to the execution of the event. All activities lasted for the whole week. All activities included the online campaign; HIV/AIDS-free testing, raising awareness about HIV, proper condom use demonstration, condoms distribution, and HIV/AIDS preventive measures. Monday, Tuesday, and Wednesday, on the 11th, 12th and 13th May 2018. The online campaign was done by both RVCP and MEDSAR. Student volunteers spread the message on candlelight Memorial Day, identifying the negative effect of HIV/Aids, fight HIV stigma, fight back discrimination, mobilize people to get a free HIV testing, to give hope to those who affected by HIV and to present HIV status in the community as well as sensitizing people about the week program.

Our aim was to raise awareness about HIV/AIDS, especially in youth as we find that a high percentage of people who live with HIV are the youth. We targeted adolescents, middle age people, and adults since we wanted to fight back sugar mums and dads who undermine the lives of young people by increasing the prevalence of sexually transmitted diseases, unwanted pregnancies which might increase the level of poverty and deaths. Not only this but also while posting, we tagged different government institutions, Non-Governmental Organizations and researchers to make them aware of the candlelight memorial day and give value or stop discrimination for those who have been affected by HIV/AIDS.

Through the community outreaches, people in HUYE were freely tested for HIV, and there was condom distribution to citizens of HUYE. The campaign was done at MPARE (A) center MPARE (B) center, KIMANA center and HUYE COMPLEX CAR PARK where the event got executed.

It is not only the above activities that were done during the campaign but also taught on how to prevent HIV, counseled infected people and linked with nearby dispensaries for earlier medication adherence and more so proper condom use.

Through the fundraising made by both RVCP and MEDSAR volunteers, some HIV affected families who are in group at Kabutare hospital, have been given social and economic support like clothes, materials including soaps, shoes, …through these donations, four families were given, and more than twenty families were given other facilities like basic needs (clothes). The execution was made in joint with MEDASR, University of Rwanda, HUYE district, AHF Rwanda, and Rwanda Biomedical Center. 478 people were present on its five days and more than 1000 people were screened during the campaign. They were online campaigns, community outreaches and the rest of people present on the celebration day being good messengers. Many messages reached wide coverage.

Sunday 20th May 2018 was the celebration of the 2018 International AIDS Candle Light Memorial Day. A walk of raising awareness with Huye community, HUYE police, and students at the University of Rwanda started from Huye Main HALL (IMBERABYOMBI), the participants heading to the venue of the celebration at HUYE FARMERS HALL near the Huye Car Park. A walk of raising awareness with Huye community

After welcoming participants and briefing of the agenda of the day, we proceeded by lighting candles, standing up and taking a minute of silence to commemorate those who died due to HIV/AIDS. Afterward, sensitization and education on HIV/AIDS and against stigma on PLWHIV through speakers’ inspirational speeches, sketches, songs, poem, and testimony from Odette who lives with HIV were of great help. To the orphans and widows, a message of hope was shared and assistance provided to children with HIV/AIDS who are hosted at Kabutare hospital. We gave them clothes, soaps, sugar and powdered milk.

The event was marked by a walk, testimonies, poems, theatres, different speeches which aimed to raise awareness about HIV/AIDS, stop stigma and announce different preventive methods against HIV/AIDS. The candlelight memorial day was celebrated in HUYE district where it was started by a WALK from IMBERABYOMBI, done by different people including   the University of Rwanda Leaders, local leaders in HUYE, the community in HUYE, RVCP and MEDSAR members and students from high schools, The walk started at 10:00 am and lasted about 15 minutes. It ended with the igniting of candles which depict hope in HIV positive people and which represents the hope of an HIV free world we plan in our future as all we need is an HIV free world. The event was successful and interactive; much coverage by media houses was taken. The candlelight memorial event was marked by different speeches provided by different guests who were present at the event. The MEDSAR president gave a welcoming note to different attendees of the event and reflected back on the importance of the event in the Rwandan society. After the speech from the MEDSAR president, Mashyaka Emmanuel, the coordinator of RVCP recognized the presence of everyone in the event and tucked on every single work done by both associations in the preparation of the event. The RVCP coordinator also showed the enthusiastic spirit of both RVCP and MEDSAR and assured the continuity of community-based activities. His speech was emphasized by Odette, who gave her testimony on HIV/AIDS. The two invited inspiring women tried to caution us how we can preserve our lives as youth from their testimonies, and also gave hope to other people who live with HIV. They described fully the bad impact of HIV on a person individually, in the society and the country as a whole. They both ended their testimonies by encouraging the youth on being cautious with their lives. Girls from RVCP Anti-HIV clubs, on eof the twelve clubs which work with RVCP gave her message through a poem, which was telling the community the consequences of HIV and the problems faced because of HIV.

In their theatre, SOVU club working with RVCP too showed how sometimes HIV is neglected in the community especially youth while it is a very fatal disease. Message through a poem

The event continued with donations of materials to the kabutare health center. The donations will help HIV victims to flourish and build in them hope for the future. Four vulnerable families in HUYE district were given goats to improve their lives. All these donations were obtained from the fundraising done by both RVCP and MEDSAR members at the University of Rwanda.While the event was going on, all people were called upon to come and do their HIV screening. People from church, by passers, men and women were exhilarated to take their test for free.

After the event, people got free condoms which will help them to prevent themselves HIV/AIDS.

The data got from the screening activity were not expected. Many people got screened, and they were even more motivated to come for an HIV free testing. All these shows that Rwandans are now willing to know more about their HIV status, and shows that together, we can make an HIV free world. People who were tested HIV positive were helped Rwanda Village Community Promoters, through HIV/Aids prevention, family planning, sexual and reproductive health program, is looking forward to continuing to increase awareness about HIV pandemic and distribute condoms in the different anti-HIV youth clubs we work with. We are also planning to work with high schools, villages, and Universities for the circumcision exercises. We are now analyzing the survey about HIV, sexual and reproductive health that will help us to assess the cause of unwanted pregnancy in HUYE as well as devise ways of combating new HIV contractions. In nutshell, HUYE citizens displayed a good behavior and showed commitment to attend the campaign, to learn and understand more about HIV transmission, preventive measures, stop stigma, proper condom use and have undergone a free HIV testing. RVCP has a great pleasure to recognize partners including RBC, AHF-RWANDA, HUYE DISTRICT, MEDSAR and local Media. On behalf of the Candlelight Memorial Day organizers, RVCP is expressing its great gratitude to all attendees and partners who made this event more memorable.