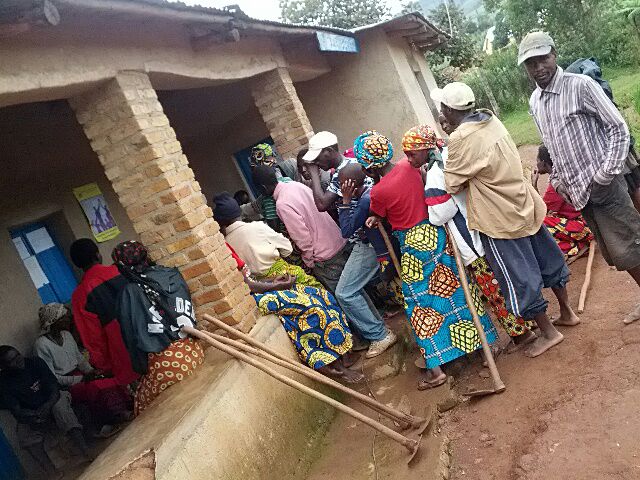 Due to tight schedules of RVCP members/volunteers and availability of inhabitants, celebration activities took place on Saturday, November 28th from 7:30am to 8pm in Nyakagezi village, Huye sector, South Province.Member of Parliament honorable Gloriose was the guest of honor.

The theme of the one-day event was “Getting to Zero”, a great opportunity to raising awareness of the deadly HIV/AIDS in the community as the world targets to get to zero new infections, zero stigma and zero AIDS related deaths. Apart from RVCP volunteers and ordinary citizens of the Nyakagezi community, this event also attracted community leaders, community health workers, researchers, local businessmen and women, faith and religious organizations leaders among others.
The one-day annual event directly benefitted over 250 people in attendance including RVCP members, volunteers and the community of Nyakagezi cell. It was also estimated that the message of the day was sprayed to over 5000 people in Huye and Gisagara districts since attendees were urged to be good
messengers to their homes, neighborhoods and communities.

Among activities of the action-packed day included the community work (umuganda) in Nyakagezi cell by local residents and 40 members of the HIV prevention program in RVCP spearheaded by program director Ms. Marie Florentine Hategekimana who afterwards provided a public lecture on HIV awareness, stressing on the theme and explaining why and how to beat the deadly disease to zero, reaching zero discrimination, zero new infection and zero HIV related death.

Later, Florentine was joined by Mme Claudine, a single mother from Tumba Tubeho youth club where both combined to teach the audience on preventive methods emphasizing on the accurate and correct use of condom. Thereafter,Mme Claudine demonstrated to onlookers the proper use of a condom as previously taught by the RVCP- HIV prevention program department.

In her address, honorable Gloriose who was the guest of honor, called on youth to be key players in fighting HIV/AIDS, urging them to work hard, be self-reliant so they can avoid/decline poisoned gifts from sugar daddies and mammies who drive them in malicious ways before labeling it as currently one of the major contributors of HIV injections and unwanted pregnancies.

Rwanda Village Concept Project (RVCP) also partnered with Huye-based Sovu Health Center for a free of charge HIV testing and patient counseling activity, a voluntary program that saw a total of 126 people tested and counselled on how to behave from then onward.

The eventful day packed with multiple agendas on schedule, ended with the screening of a movie called ‘If I Knew’ which basically narrates the life of a young woman who was enticed with a fancy life through shortcuts and ended up HIV positive and unwanted pregnancy.