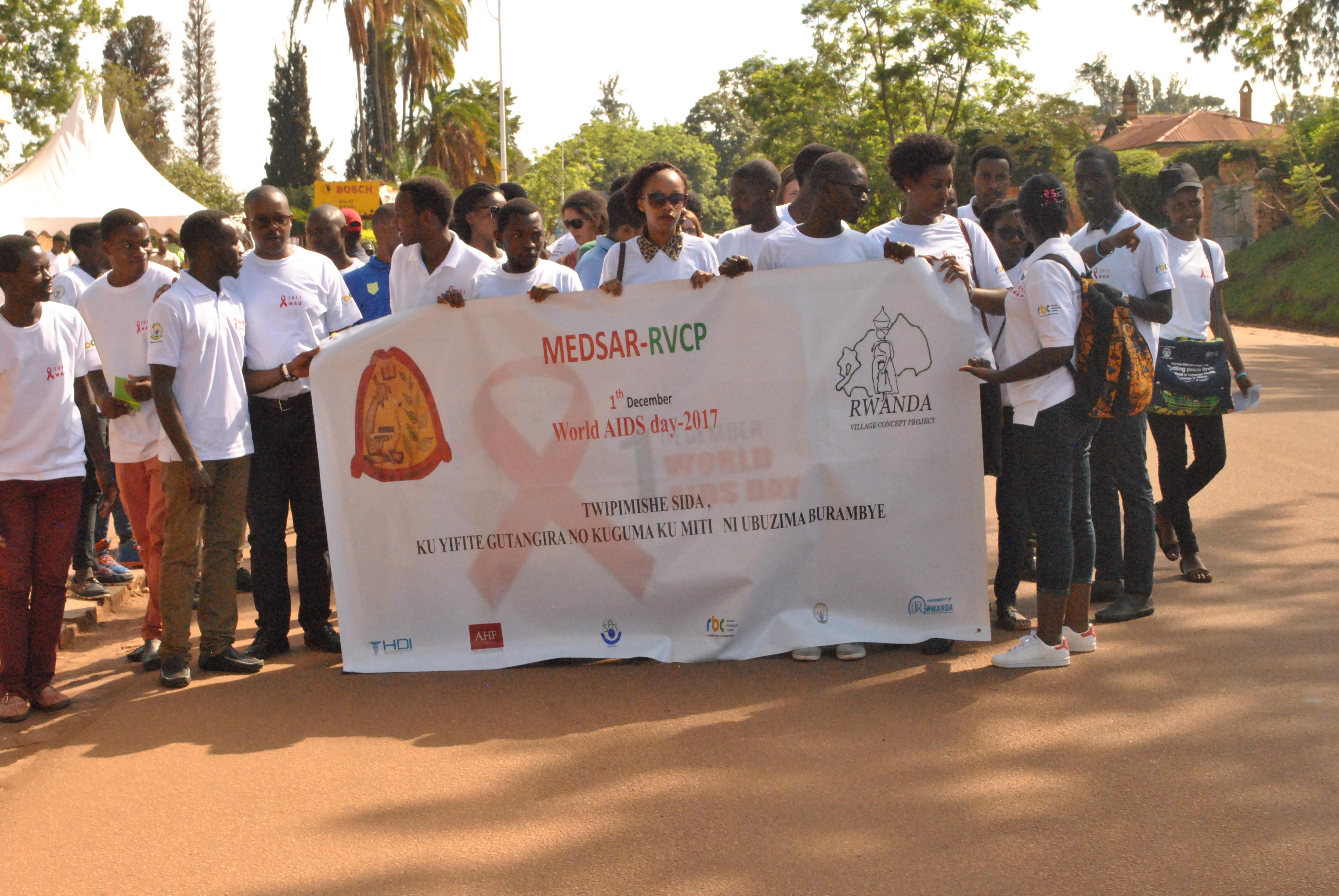 World AIDS day takes place on the 1st December every year since 1988. It is an international day dedicated to raising awareness of the AIDS pandemic caused by the spread of HIV infection and commemorate those who died from AIDS-related illness.

According to WHO, an estimated 36,7 million people were living with HIV/AIDS and 1 million people died of HIV-related illnesses worldwide in 2016 making HIV one of the most destructive pandemics in history. Rwanda faces an HIV epidemic at the prevalence of 2.9℅ among adults aged 15 to 49(2014 UNAIDS estimates)

With strong dedication to fight against this pandemic on the 1st December 2017, the Joint Rwanda Village Concept Project (RVCP), through its HIV/AIDS Prevention, Family planning, sexual and reproductive program and Medical Students Association in Rwanda (MEDSAR) through SCORA joined the World in the commemoration of the 29th World AIDS Day to increase awareness about HIV, minimize stigma and discrimination towards HIV positive people, mobilize community for voluntary Counseling, testing and give hope to new generations. The WHO’s theme of world’s AIDS day was “Increasing Impact Through Transparency, Accountability and Partnership” whereas in Rwanda, the theme was: “Get tested. If positive, start and stay on lifesaving treatment”. The event was an opportunity to unite in fighting against HIV and has been celebrated in three places simultaneously:  in Kigali Petit Stade, Huye District Imberabyombi and Rwabuye.

On this day many activities such as: the launch and demonstration of the new HIV-Oral self- testing by the Ministry of Health, walk to raise awareness, reaching more than 3000 people spreading information about HIV/AIDS, distribution of HIV and STIs leaflets and condoms, free HIV testing, and demonstration of proper condom use were done. There was many RVCP and MEDSAR volunteers answering some frequent asked questions on sexual issues especially from youth. demonstration of proper condom use

The government of Rwanda is among the countries which put extra efforts to minimize the new HIV infection cases by providing many preventive facilities such as free condoms, free post exposure prophylaxis, free screening tests and free medications for those who are tested positive. We can’t end without expressing our deep gratitude to our partners RBC, SFH, HDI-Rwanda and Huye District for their support and mentorship that ascertained an impactful World AIDS day in Kigali and Huye Communities.

RVCP Hosted Plaisir Concert at the University of Rwanda