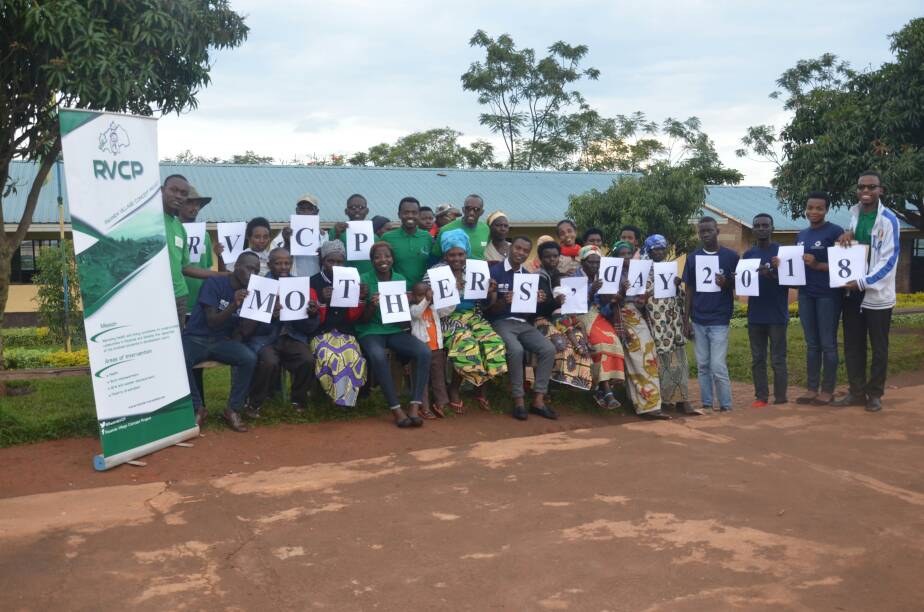 Nowadays mothers are more likely to experience undesirable health conditions including violence, low access to health insurance, basic needs and intellectual capacity. These results from   Culture and traditions in Rwanda which have never been fair to women. Until today in certain areas women are still perceived as housemaids with very low value in comparison to men.

Although the government has put effort in gender gap closure, culture and traditions hinders the momentum and women themselves are not able to be self-reliant, they desperately need to be promoted in economic activities as well as social life at the community level.

Taking women vulnerability especially rural mothers into consideration, RVCP through the Gender empowerment (Pyramid) program pioneered the custom of celebrating the mothers’ day in Rwanda with the purpose of appreciating the significant role of a mother in a family and to honor mom at the community level. “Honor Mom, Help a Mom”

History of the mothers’ day

Mothers’ day is a celebration honoring the mother of the family, as well as motherhood, maternal bonds and the influence of mothers in the Society. It is celebrated on various days in many parts of the world, most commonly in the months of March or May. The modern mothers’ day began in the United States, at the initiative of Ann Reeves Jarvis in the early 20th century. Since 1908 the mothers’ day became an official celebration day due to the belief of honor that a mother is “the person who has done more for you than anyone in the world”.

Middle May, 2018 putted the Rwanda Village Concept Project (RVCP) on the list of few institutions in Rwanda that celebrate the mothers’ day. It was the first time for RVCP to show the community a caring spirit in sidelines of mothers’ day. In fact, RVCP lead the first and successful mothers’ day 2018.

We had an online campaign a week prior to the day of celebration. This allowed us to deliver message to thousands of our followers on social media about the value of a mother. We made Rwanda aware of the influence of a mother to the family development. Through the campaign, the students of University of Rwanda and the community knew that a mother is the heart of a family and that she deserves honor.

RVCP organized the mothers’ day outreach in Gitwa and Rango cells of Tumba sector located in Huye district of Rwanda. In Gitwa cell, we visited the EJOHEZA single mothers club while in Rango cell, we visited the BYIMANA mothers’ night with intention to strengthen the Women’s Health Raising Awareness Project (WHRAP) launched by Pyramid program in March 2018 and to select the vulnerable women that would be helped on mothers’ day.

We taught mothers about their value and the weapon of family planning in effective management of their family. Moreover, we not only facilitated mothers by raising awareness about mothers’ values, family planning and role of health insurance but also we impacted them economically by giving the free annual health insurance to vulnerable mothers and their families in those cells. Illustrating the importance of health insurance “Mituelle de Santé”, Niyibizi Assouman Brandon, the Vice Coordinator of RVCP told the attendants of mothers’ day outreach that those health insurance have to be used efficiently. “None should be severely ill. You have to boost the culture of prevention against diseases and to visit hospital early in case you have symptoms and sign of Malaria, TB, diarrhea and other diseases”- He said. A mother receiving health insurance from an RVCP volunteer A happy RVCP volunteer at service Kids are the best beneficiaries of health insurance Happiest RVCP volunteers and mothers’ community of Tumba sector on sidelines of the first and successful mothers’ day.

RVCP VOLUNTEERS PLAYED A SKETCH ON THE INTERNATIONAL WOMEN DAY 2019